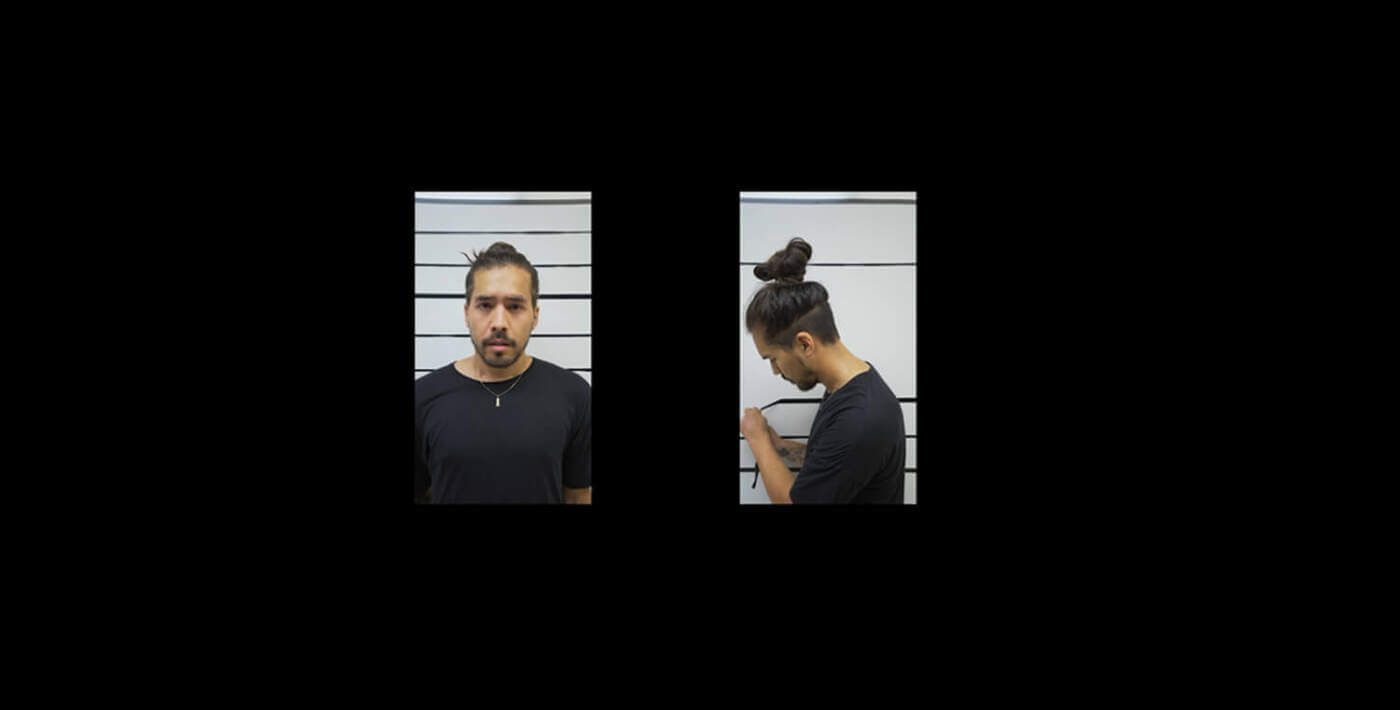 This tableau vivant illustrates the concept of desistance by replicating the booking photo. Accompanying the criminal record, this photo, commonly known as the “mug shot,” marks a new episode in the lives of people under judicial control, their entry in the system, and by extension, their new identity. In some countries, this photo follows them for the rest of their lives.

The artists devised a way to present a desister who is fighting to get rid of his image as a criminal. They emphasize the fact that people who enter a process of desistance must not only get out of prison, but also get prison out of themselves. The artists also wanted to invite visitors to follow the person throughout his process.

The work is meant to give society a new perspective on what justice is. It promotes social inclusion and puts human beings back at the heart of the correctional process. It emphasizes the fact that the prison sentence should be seen as a time of transition, that people under judicial control have work to do on themselves and that society’s role is to believe in their chances for success, to guide them in the process and to offer them opportunities.

Prison is a place where people who have committed a serious offence or a crime are deprived of their freedom.

“But what’s the use of a prison sentence?”

PUNISH: For some, the prison sentence is a way to punish criminals proportionally to the gravity of their crime. They must pay their debt. This punishment would right the wrongs that they committed against both society and their victim(s).

“It’s easy to judge me. It’s easier than understanding me.”

DISSUADE: For others, the prison sentence is a way to convince society that crime has consequences. It is not a holiday camp. One way to know if the message is getting across is to check if a population’s crime rate is rising or dropping. Some also believe that a severe sentence will prevent recidivism.

“Do you really think that being stricter with me is going to help me?”

ISOLATE: The prison sentence can also be thought of as a way to isolate people who are deemed dangerous. They must be neutralized in a confined space and guarded. Before they are released, there must be an evaluation of the risk that they will start offending again.

“If you have no trust in me, what’s the use in my trying to gain it?”

REHABILITATE: Finally, the prison sentence may be seen as a time of reflection during which people who have committed a crime start to work on themselves and with others. They seek to understand the suffering, that they have inflicted, that they have experienced, that they will never again inflict on anyone. In this time of reflection, these people must be guided towards change, towards integration or reintegration into society.

“It’s part of what is called ‘desistance’.”

Desistance is the slow, complex process through which people under judicial control stop offending and integrate progressively into society. It is like quitting smoking: smokers are not automatically considered “non-smokers” the day they put out their last cigarette; instead, they are “ex-smokers.” It is similar with crime: people who no longer offend are called “desisters” in criminology.

Desistance requires major changes at various levels: in the way of thinking, in social relationships, in one’s identity. Desisters also encounter several difficulties, notably feelings of isolation, of failure and of despair. This constitutes a true test of endurance to be able to be part of the community.

To have a good understanding of the process, one must consider that not all desisters have the same starting point; they have neither the same opportunities to pull through nor the same interests. The changes that occur do not always result from their own decisions and are not always positive. The path can thus be long and winding and riddled with pitfalls, frustrations and feelings of injustice.

Also, and especially, desistance is hindered by society’s image of people under judicial control. By constantly reminding them of their criminal past, it suggests to them that they are incapable of changing, or even of living in society. It is important to keep in mind that it is not the criminal, but the crime, that must be curbed. To encourage desistance, it is essential to believe in rehabilitation and to remember that people under judicial control are first and foremost human beings.