Robert-Lionel Séguin devoted his life to one overriding goal - gathering material evidence of the daily life of Québec in times past, a history that had been largely neglected, forgotten or condemned. In thirty years of research, Mr Séguin collected some 35,000 objects bearing witness to the rural and domestic life, learning and arts of traditional Québec culture. He was also responsible for creating an archive and a library of over 6,000 titles in addition to documentation on the customs, habits and socio-economic conditions of Quebecers. The ethnological collection as a whole is unique in the country for its richness, diversity and comprehensivenes. M.Séguin focused his intellectual research on material culture, a subject of little attention in Québec until then. For his work, he surrounded himself with what he later termed figurative archives, which formed the basis of his collection. In addition to thousands of pages of writing, including many published works, Robert-Lionel Séguin made a major contribution to ethnological filmmaking (31 films, includingLe faiseur de violons [The Violinmaker], Le dressage de bœufs [The Taming of the Oxen],La taille de la pierre [Stonecutting]...) The artifacts in this collection are divided into several categories - furniture; personal objects (clothing, toiletries, etc.); tools and equipment (used in various occupations and in farming); objects of communications (records, musical instruments, sound reproduction devices, objects used in advertising), transportation, art (especially folk art), recreation (games, toys, sports equipment) and social significance (commemorative or ceremonial objects); wrappings and containers; ironwork / builder's hardware, medical objects and various other objects of ethnological importance.

Not to be forgotten is the pitwheel. This was a monumental device made up of a huge wheel - 4.27 metres in diameter - and a gear pair system operated by animals and used to thresh grain. This key exhibit inspired the Museum's architect to highlight it by designing a rotunda in the main hall. See it in 3D model! 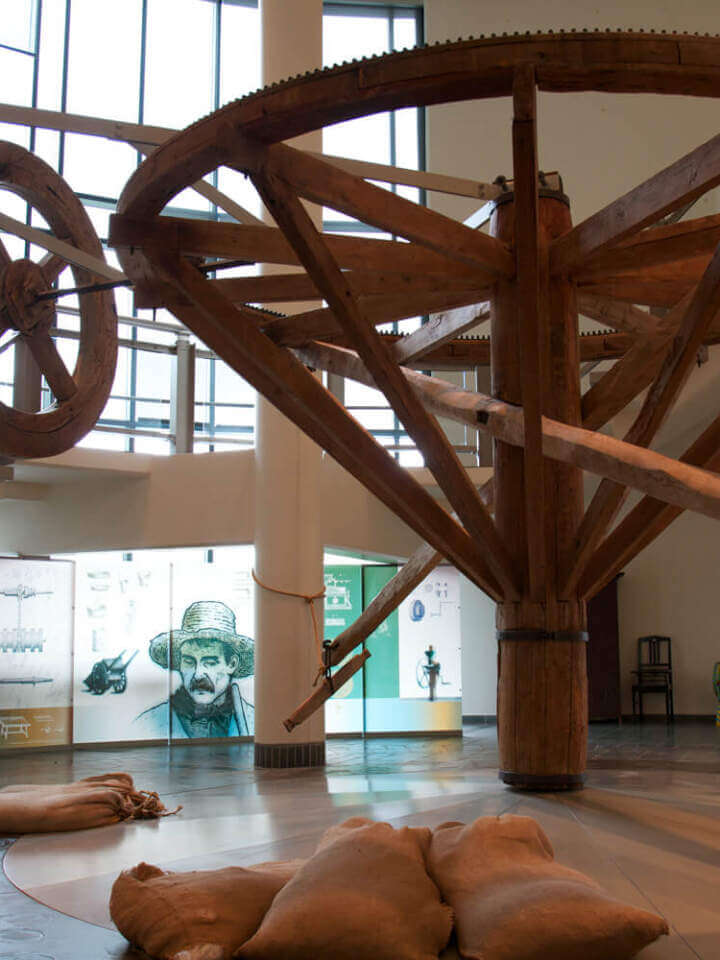